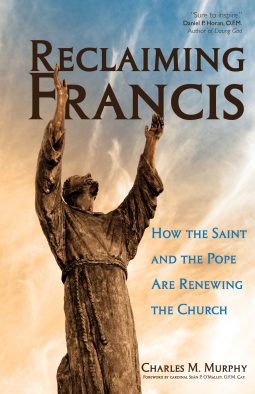 The full title of this book by Monsignor Charles M. Murphy is Reclaiming Francis:  How the Saint and the Pope Are Renewing the Church.

In the Foreword to the book, provided by the Archbishop of Boston, Massachusetts, we learn that Monsignor Murphy had completed a book proposing Saint Francis as the model for renewal and reform, evangelization, within the Catholic church, when the newly elected pope chose "Francis" as his papal name, after Saint Francis.  The author then worked his manuscript to incorporate into the book Pope Francis's vision for the church's renewal, and how to help people renew their faith. 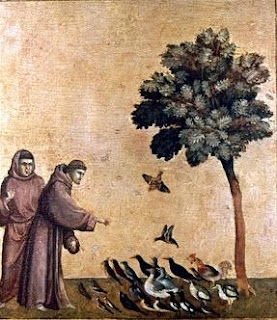 I enjoyed the book the most when the long history of the Catholic church was touched on, and when the author expressed his own views rather than quoting the views of others.  For example:

Perhaps the new way of evangelizing is not so much through confrontation and argument, but through conversation, dialogue, and affirmation...  Saint Francis seems the perfect guide to lead so many in our times into deeper waters.

He inspired in his own lifetime what is generally recognized as the greatest spiritual renewal the church has ever experienced in her long history. 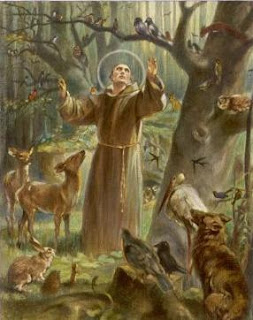 The author explains that by studying the lives of saints such as Francis, the faithful can see a grownup version of faith, as opposed to the vision they learned as children when studying what it meant to be a believer.

Part One of the book explains Saint Francis's story and how it relates to our world, today.  He also quotes Pope Francis, and I was taken aback by the new pope's simple, direct, humble manner of speaking.  He is a Jesuit, so he is surely a learned man, but he does not flaunt his learning in his speech.  The new pope speaks as one human being to another human being, with respect, with vehemence, and with compassion.  I found myself thinking that his words would probably sound familiar to the contemporary followers of Saint Francis. 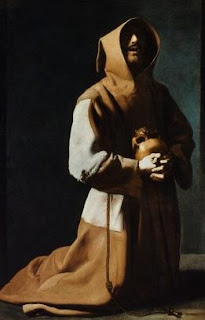 The author uses an entertainingly eclectic mix of quotes to bring home his messages:  poetry by Seamus Heaney and other poets, biographies of saints written by saints and by converts, the Gospel, papal speeches, articles about popular figures from today's culture, writings by the faithful humble and famous, books about modern parenting, comic sketches, many of which are referenced in footnotes that are listed at the end of the book.

Part Two of the book discusses how the Catholic church can be reinvigorated, reborn, made relevant to people today, by looking to Franciscan elements of faith.  The author discusses various new movements within and without the church, many of them grassroots movements, that seek to create a greater sense of community for Catholics living in anti-Catholic or secular societies.  He demonstrates how their principles follow those of Saint Francis, and how Pope Francis cites the views of Saint Francis concerning the environment, wealth and poverty, and peace and war.

One lasting element I take from this book is the conviction that Catholics, myself included, should strive to continue their Catholic education after their Confirmation. 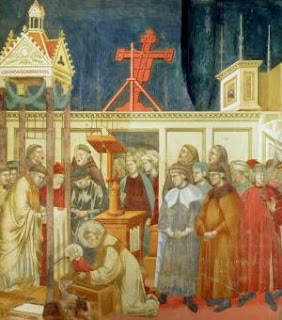 As Pope Francis continues to call for the rebuilding of the Church, Msgr. Charles M. Murphy, author of The Spirituality of Fasting and Eucharistic Adoration, offers a timely look at what today’s Church can learn from St. Francis of Assisi about evangelization and renewal.

When Archbishop Jorge Bergoglio chose the name Francis, a renewed sense of hope and energy swept through the Church. In this timely book, Msgr. Charles M. Murphy examines the correlations between the two Francises and shows why St. Francis is an ideal model for today.

Just as in St. Francis’s time, today’s Church can only be rebuilt and reinforced by a spiritual renewal that comes from within itself, a vision that Pope Francis carries forward in the New Evangelization. Pope Paul VI, the first modern pope to focus on evangelization, once said, “People today listen more to witnesses than to teachers.” Pope Francis knows that St. Francis is just such a witness and Murphy enlivens them both for his readers.

The book is available in both e-book (Kindle mobi) and as a paperback edition.  Here are links to the books at Amazon.com

If you are curious to read about Saint Francis of Assisi, here is a selection of books and one film, available at Amazon.com:

If you are interested in reading about the history of the Catholic church, here is a selection of books, available at Amazon.com:

The book is from Ave Maria Press.  Here are other titles by the same author that might be of interest, available at Amazon.com

If you enjoy Michael Curtiz films, this one was filmed on location in Assisi, Italy, about the life of St. Francis:

I have a review on this blog of a wonderful guidebook to Assisi and the surrounding area, especially for hikers who wish to walk in Saint Francis's path:  Assisi Walking Adventure Guide.  And another book reviewed here looks at how the papacy is the modern incarnation of the Roman Empire:  The Restoration of Rome.