A Comedy of Murders by George Herman 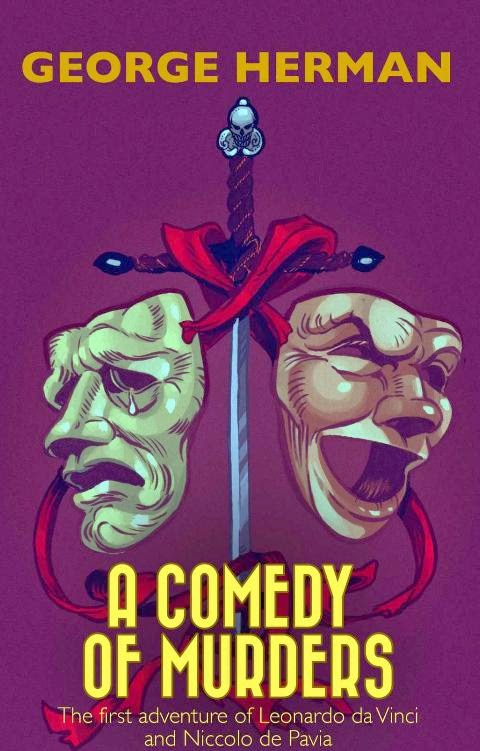 I hesitate to call A Comedy of Murders a "mystery novel", like the subtitle says, A Novel of Mystery.  Once I label it a "historical mystery" because it is set in the Italian Rensaissance, many people quickly imagine the book to be "An Agatha-Christie set in the past", and that would be a huge mistake.  A Comedy of Murders is just what the title says.  It is a comedy in the style of Commedia dell'arte, and there are lots of murders.  It is a well-written comic historical novel for literate adults.

Commedia dell'arte is an Italian invention from circa 1500.  It is an improvised theatrical style that relies on stock characters and the performers' quick wit and practiced skills to create a successful show, a show that is, ideally, adapted to the audience.  In Italian there are other names for the style, including Commedia a braccio, meaning off-the-cuff-theater, or improvised theater. 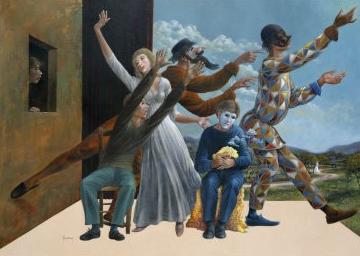 Troupes of traveling performers tailored standard story-lines to appeal to the local audience, touching on local politics, scandals, and prejudices.  In A Comedy of Murders, a traveling Commedia dell'arte troupe, I comici buffoni, is central to the story.  Their plays mirror the story that occurs in the court of Milan, until they finally arrive at the court, when they become major players in the novel.

In the words of the troupe's leader, the actors, comedians, saw their role just as today's satirists see it:

We commedians see with the pauper's eye.  Life to us is absurd, irrational, totally and completely mad.  The world is an asylum where the inmates keep the warders in their place. ...

It is our mission to reveal that the honored banker is a thief and an embezzeler.  The bemedalled hero is hallow and crumbles before the shadow of a threat, or he's a butcher who considers a human life of no more value than the sweat of his horse.

In our world the lecher is impotent, and the reformer a drunk.  The priest is a seducer and the benevolent prince a petty tyrant.  And despite this view of mankind and his world, we make people laugh at it. 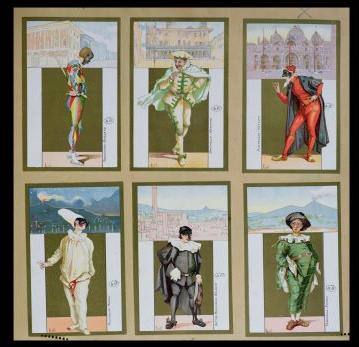 Some of the characteristic costumes for the stock characters


Early in the novel, the reader meets the actors who make up I comici buffoni, who portray the popular and timeless stock characters:  the pauper, the scheming servants, the young lovers, the older lovers and musicians, and the pompous doctor, soldier and rich man.

Then the reader meets a cast-of-hundreds who people this novel.  Some of the characters are historical and imagined by the author, other characters are richly imagined fictional characters.  While reading the book, I made good use of the list of characters at the end of the book to keep the principle characters straight! 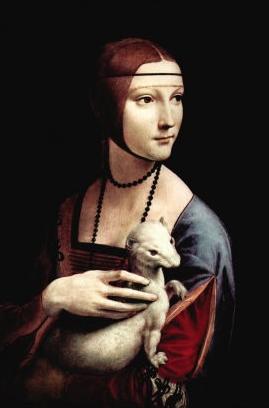 Cecilia Gallerani, painted by Leonardo, both central characters in the book

A Comedy of Murder is a richly researched and richly imagined visit to that amazing time of city-states run by princes, and explorations of our planet and the sciences, and a church more concerned with rich coffers than rich souls, and wars fueled by personal vendettas, and personal vendettas fueled by wars.  We meet the Duke of Milan, the French King, the Pope, minor city-state princes, courtiers and other hangers-on.  The reader does not need to be an expert on these times or people; the author informatively guides us through them.

Have you ever seen Richard Lester's film The Three Musketeers?  While reading A Comedy of Murders, I found myself playing a film of the story in my mind, in the style of Lester's filming of the classic historical adventure tale.  Both tales are told as bawdy, silly, historical farce, in which real people from the past are imagined as flawed, corrupt, pompous idiots lost in circumstances beyond their control.

Here is the official trailer of the 1974 movie masterpiece, to give you an idea of the tone of A Comedy of Murders:

There are some characters who rise above others in their moral fortitude, and one of those is the artist-architect Leonardo da Vinci.  The author weaves Leonardo's life and work into the story, and from about page ninety, Leonardo plays a large role in the story.  A Comedy of Murders is actually the first novel in a series of comic novels that feature Leonardo da Vinci and his friend, the fictional Niccolo de Pavia, a diminutive scholar and courtier.

There are eight books in the series:
Some marketer christened the books Renaissance Mysteries.  Renaissance is right, but mystery is stretching it.  These are historical comedies for adults set during the height of the Italian Renaissance, full of courts, castles, dungeons, torture, gossip, courtesans, rivalries, out-sized egos, rampant libidos, political scheming, erudite learning, monumental building projects, and the creation of timeless art. 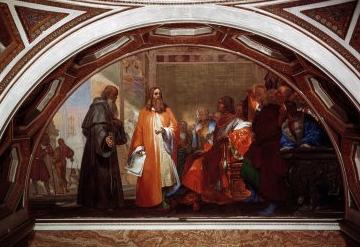 A few times I lost the plot due to the use of historical words, but I quickly caught up and was able to enrich my vocabulary.  In the 1994 edition that I read, I did find some confusing uses of personal pronouns, a few typos, some odd paragraphing, some hard to follow action scenes, and an inconsistent italicizing of non-English words, none of which detracted from the story.

I would advise a reader to sit back and savor the author's masterful recreation of that raucous, vibrant, violent, cruel and creative era.  He is especially knowledgeable about Renaissance warfare, and Leonard da Vinci's work.  Do not expect a "mystery novel".  Be open to the comic historical novel, and let history wash over you.  The author makes us a visitor to a Renaissance city-state's court, and puts us in the middle of all the nonsense.

The author ends the book with the words of one of the actors in the novel.  He states the satirists' code, so to speak, which could well be from the author's mouth, or from any satirist working today:

As long as there is life, my dear friends, laughter will be the weapon of we who mock it even as we struggle to understand it. 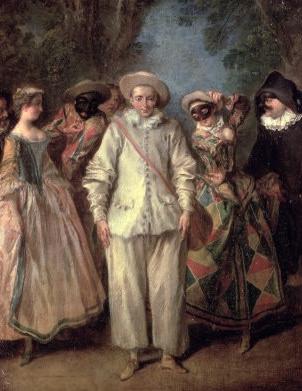 The court of the Duke of Milan is in turmoil. In this autumn of 1498 there are threats from within and without. The French are preparing to march across the Alps and claim the dukedom with armed force. The Venetians to the east and the army of the Borgia pope to the south would also be happy to grab their slice when the conditions are right. They only await a signal. ...

As the dead body count multiplies and invasion threatens, it is Leonardo and Niccolo who attempt to untangle the motives and methods of the assassinations, vendettas, and simple murders.  Due to Leonardo's anatomy studies and inventions, including a flying machine, the two amateurs draw conclusions that could spell their own doom unless the artist and his young friend can use their wits to reveal the killers even as their enemies close in.

Leonardo's fresco plays a part in A Comedy of Murders

A Comedy of Murders is available second-hand from Better World Books.

Direct link A Comedy of Murders at BWB

You can also purchase A Comedy of Murders second-hand via Amazon.com and as a Kindle e-book.  Here are links to the editions available at Amazon.com.

Here are direct links to the books in the series at Amazon.com, all available as Kindle e-books:

George Herman's novel Carnival of Saints was published before A Comedy of Murder.  It is a fictional account of the birth of the improvisational Italian theatrical form Commedia dell'arte.  Here is the book's official description:

The year is 1502, and Italy is ablaze with artistic radiance, sexual corruption, and political intrigue. Into this seething cauldron comes a vagabond of improbable erudition and outrageous appearance who calls himself Harlequin. With the help of an aging, resourceful whore named Colombina, Harlequin gathers together a band of fugitives, misfits and thieves and invents a new form of people's theater -- commedia dell'arte.

The book is available second-hand from Better World Books.

Direct link to Carnival of Saints

If you wish to read more about Commedia dell'arte and to see depictions of the various stock characters, I have a page dedicated to it at my Italophiles.com website (Candida Martinelli's Italophile Site). 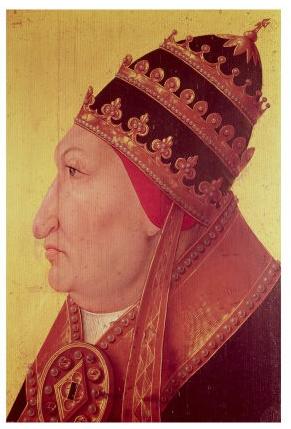 The Borgia Pope as he was, not as Jeremy Irons played him recently on TV