The Books of Apicius by Apicius, Starr and Vehling 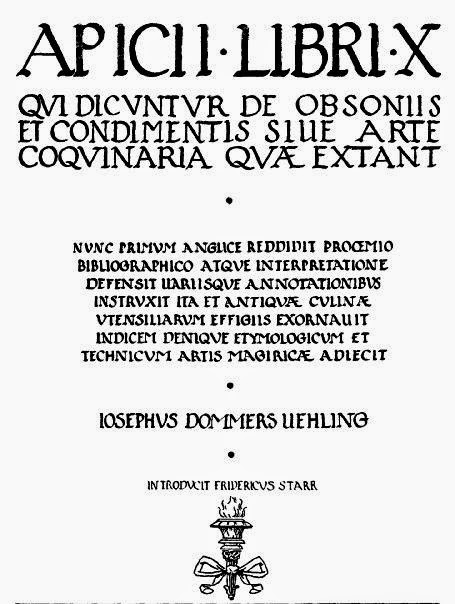 The Ancient Roman cookbook attributed to Apicius, De Re Coquinaria is presented in an English translation together with a treatise on Cookery and Dining in Imperial Rome.  The editors are skilled cooks in their own right, which makes their book, which is in the public domain, one of the more intelligible printings of Apicius's book of recipes.

The Apicii Librii, The Apicius Books, are actually the ten chapters of the Ancient Roman chef's recipe collection.  Included in this edition is a chapter of notes collected by a student of Apicius.  Manuscripts, books written by hand, of Apicius's cookbook were copied over and over again through the centuries, from roughly 100 B.C., during the reigns of Augustus Caesar and Tiberius Caesar, to the late 1400s. 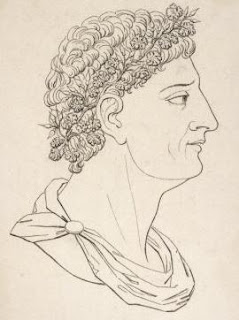 
In the late 1400s, the only surviving cookbook from the Ancient Roman era was printed using the newly invented printing press.  It has been in print ever since.  While not the first European cookbook to be printed on a press, which was Platina's cookbook in 1474, Apicius's is the oldest European cookery book in existence, and its early printed editions are rare and highly valued.  It is possibly the oldest cookery book in the world. 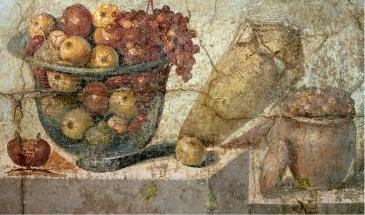 Time-capsule city Pompeii, in southern Italy, teaches us much about Ancient Roman food.  This wall mural depicts fruit and a wine amphora.

These are the ten chapters (roughly 500 recipes) of Apicius's cookbook: 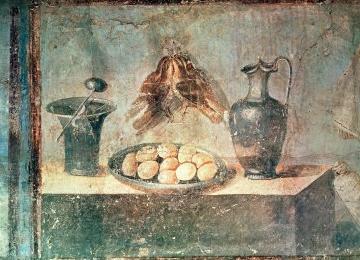 
The editors include the notes from a Goth (the original meaning!) student of Apicius's called Vinidarius.  Vinidarius includes with his 31 recipes more instructions for cooking and serving the dishes than Apicius does.  Vinidarius also lists Apicius's recommendation for what should be included in every well-stocked kitchen in the form of spices, seeds, dried herbs and legumes, liquids ingredients, nuts, and dried fruit.

You will find no bread recipes, and very few sweets recipes, because these foods were generally purchased from specialized cook-shops.  Just like today, most people do not bake their own bread, nor do them bake all their own desserts and snacks.  You will also notice the direct link made between food and health, which is often lacking in modern cookbooks.  For example, vinegar and brine are added to vegetable dishes "to counteract inflation" meaning gas, which is a problem when diets are heavy in vegetables. 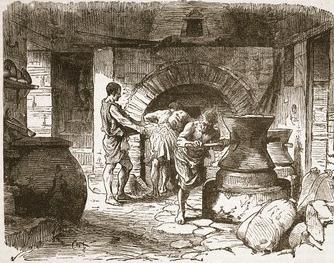 There are no bread recipes in Apicius, bakeries provided the bread


Cooking ingredients and cooking utensils have not varied much since the dawn of human settlements.  The plants and animals are those of the Earth.  The means of preparing food and cooking it has varied little over time.  Only the sources of the heat for cooking, and the means of storing food have changed, slightly, through the ages:  gas and electricity for cooking and sterilizing, electricity for refrigeration and freezing.

Utensils, serving dishes, plates and bowls, and pots and pans are remarkable similar over the centuries, since the cooking tasks have remained the same.  Once a good design was developed, it lasted!  The major difference is that today these things are normally mass produced, and most often machine produced. 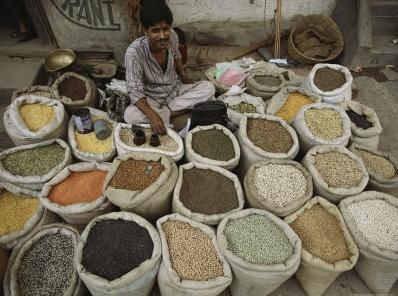 Similar to Asian Indian food, the food of Ancient Rome relied heavily on legumes, with spices and vegetables to vary the flavors.


The flavors of Ancient Roman cooking are very similar to traditional North African and southern Spanish and Asian Indian cooking, with a reliance on staple grains and legumes and vegetables, with a heavy use of spices and other flavorings to vary the taste of the dishes and to create many layers of flavor in each dish (the "pepper" in the cookbook is likely a spice mix like all-spice or five and seven-spice).  The meat dishes are strikingly similar, too, the major difference being a lack of pork dishes, and the lack of dishes reliant on wine in Muslim North Africa, where both pork and alcohol are proscribed.

Here is a knowledgeable British woman explaining in two minutes about Ancient Roman food while cooking some in the the Ancient Roman way: 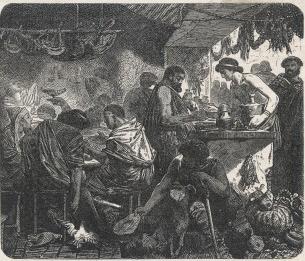 A Roman tavern, most citizens of the Ancient Roman capital city, Rome, did not have kitchens in their apartments, they had to eat in taverns or from street food stalls


Three other major differences between Ancient Roman cooking and today's cooking are the New World ingredients, sugarcane, and more meat: 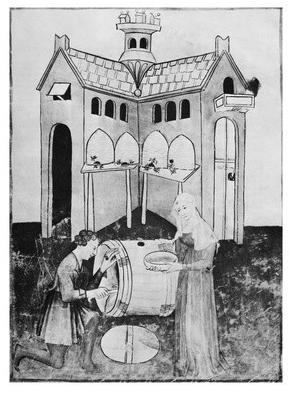 Honey and reduced grape juice were the primary sweeteners for the ancient Romans.  The Arabs brought sugarcane to Europe around the year 800.


The editors of this wonderful translation provide such scholarly additions as: 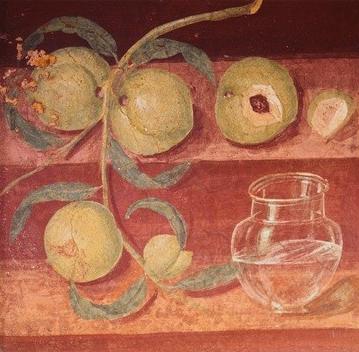 
The creators of the e-book edition have hyperlinked many parts of the book for easy of reference.  The e-book is free.  Some entrepreneurial persons have taken the free text and created books for sale.  I provide links here for free and paid versions.

I leave you with the thought that food culture is as timeless as human nature:  the editors of this book quote from the wall of a Pompeian inn-keeper's wall, where it is boasted that his roast pork is "pan-licking good". 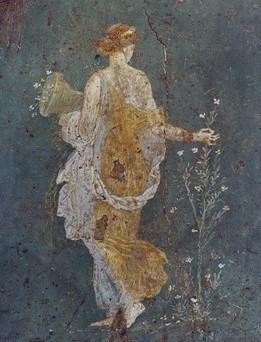 
The Books of Apicius:  Cookery and Dining in Imperial Rome is available as a free e-book in various e-book formats from Project Gutenberg, the grand-daddy of free on-line books.

If you wish to a free Kindle e-book or to purchase a printed copy of the book, here are direct links to several available via Amazon.com:

Visit my review on this site of free e-books of Italian Medieval and Renaissance cookbooks.