Venice in the Moonlight by Elizabeth McKenna 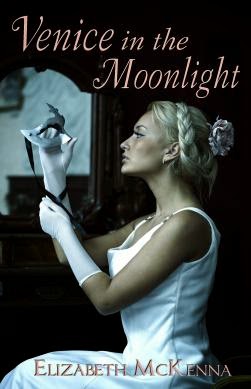 
The female protagonist, Marietta, was a child-bride to a violent, wealthy man, but Marietta is left a widow after only a few years of marriage.

She never imagined that at twenty years old she'd already be a widow in black.  On the bright side, she was no longer married to Dario, but her future still looked grim.

Marietta is the daughter of an artist, and an artist in her own right, which is an interesting element in this story.  After being windowed, Marietta intends to leave the Venetian mainland and return to Venice.  On her way there, she discovers that her father has died recently.  Only when she gets to Venice does she learn her father's death was very suspicious.  Out of guilt and a sense of duty Marietta begins to investigate what really happened to her father. 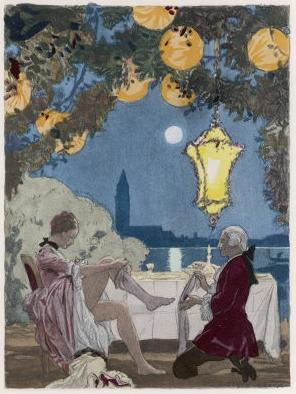 Casanova in Venice with a lady

Casanova makes an appearance as a dodgy aristocratic friend of Nico Foscari, the male lead, a young aristocrat with declining sight who spends most of his time in louche undertakings while dreading the day he will be completely blind.  Casanova is involved in the book's mystery plot, which is a fun addition to the story, weaving in fact with the fiction.

The point of view alternates for much of the book between Marietta and Nico.  We get a look into their minds and learn, almost before they do, that there is a growing interest between the unlikely pair.  I thought the interplay between Marietta and Nico was reminiscent of The Scarlet Pimpernel and his ladylove:  lots of deceit on both their parts, and a seemingly doomed chance at love that comes to fruition. 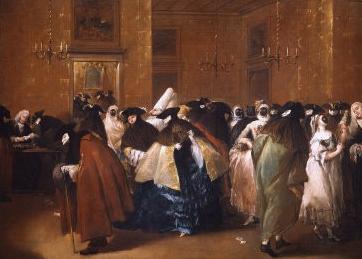 The Ridotto, the Venetian casino, during Carnival, is the setting for several scenes

There are some interesting politics in Venice in the Moonlight.  The 1750s was a time of growing enlightened thought, but that sort of free-thinking was seen as a threat to the established order.  Here is Marietta talking with Nico about Casanova, and Casanova's idol, the free-thinker, free-lover, atheist Voltaire:

Her nose wrinkled.  "So they are heretics."

"I believe Voltaire considers himself a writer and Cas a lover."

"You know what I mean.  They do not support the Church or any monarchy."

Nico took a drink of wine before he answered.  "Like those who preach free will, I think the world needs to improve.  The Church and the various monarchies have had their chance.  Maybe it is time for them to step aside and let the masses make their own choices."

She looked around to see if anyone had heard him.  "Men have been arrested for such views.  You shouldn't be so bold." 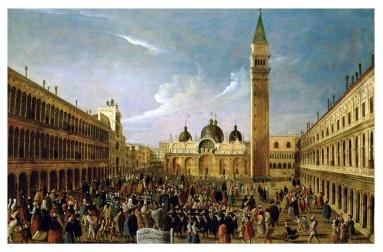 St. Mark's Square at Carnival time, a setting from the book


For me, the cover does not seem to match the book very well, although I can't put my finger on why I feel that is the case, unless it is that the dress seems too modern and the image doesn't fit the descriptions of the dresses and hair style of Marietta in the book.

A cover showing Venice in the 1700s with carnival celebrations going on, as they are throughout the book, would be lovely.  In those days, carnival was celebrated from October to Easter, to cater to the tourists from all over Europe and America.  The town was decadent and earned its income from selling sin, much like Las Vegas today, Sin City. 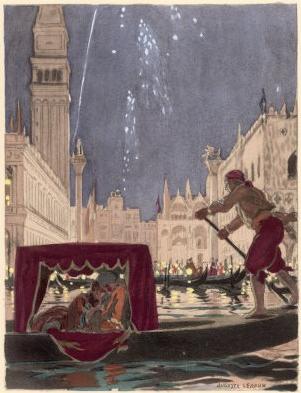 A gondola assignation at Carnival time

I noticed that the tone of Venice in the Moonlight varies and the language is uneven in its quality at times.  The sex scenes are not crudely pornographic; they are romantic combined with some explicit details.  I believe there are a few historical inaccuracies in the book, and there were a one or two editing errors.  But there are also many lovely period details, and any book set in enchanting Venice, Italy, has a lot going for it from the get-go!

Most of the story takes place in Venice, and the author includes details about the streets, canals and buildings, creating a strong sense of place.  But it is the plot that drives the story.  The romance is interesting, and the couple make a good match by the end of the book, each having grown through the course of the story.  Venice in the Moonlight is a satisfying, simple read, offering a glimpse into the past, and the titillation of the central couple's sexual and spiritual match, all-in-all, a guilty pleasure.


From the book's description, which gives a bit too much away, in my opinion:

A Story of Vengeance, Forgiveness, and Love

After her husband’s untimely demise, Marietta Gatti is banished from the family’s villa by her spiteful mother-in-law.  She returns to her hometown of Venice and her only kin—a father she hasn’t spoken to since her forced marriage.

Her hope of making amends is crushed when she learns she is too late, for he recently has died under suspicious circumstances.  Grief-stricken, Marietta retraces her father’s last night only to discover someone may have wanted him dead—and she may be next.

When the prime suspect turns out to be the father of the man she is falling in love with, Marietta risks her future happiness and her life to avenge the death of a man she once hated.

Elizabeth McKenna’s latest novel takes you back to eighteenth century Carnival, where lovers meet discreetly, and masks make everyone equal. 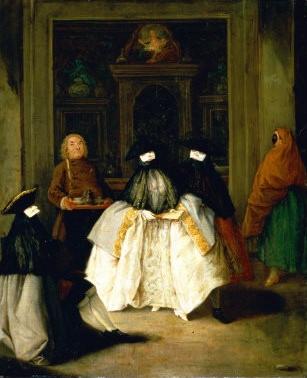 A Venetian coffeehouse with the guests in masks

The paperback edition of Venice in the Moonlight is available from Amazon.com's CreateSpace print-on-demand company.

Direct link to Venice in the Moonlight paperback

The paperback edition and the Kindle e-book edition of Venice in the Moonlight are available from Amazon.com.  Here are direct links:


If you can't get enough of Venetian carnival costumes, here is a five minute video overload of them: