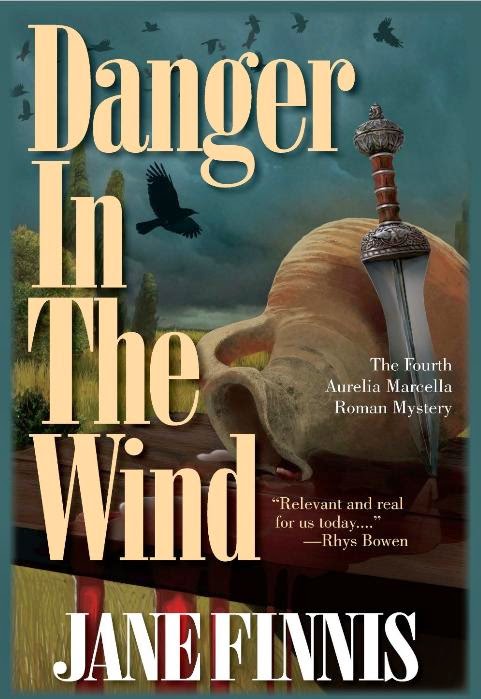 This mystery series, the Aurelia Marcella Roman Mystery Series, is set circa 100 A.D. in Roman Britain.  The Emperor is Trajan.  The narrator of the series is Aurelia Marcella, an immigrant to Britain from Pompeii.  Her father, a former Centurion in the Imperial Army, brought the family to the York area of Britain, after their home was destroyed in the volcanic eruption of Mount Vesuvius in 79 A.D.

Here is what Aurelia's brother says about his twin sister:

Most women run from danger like mice from a cat.  You turn into a lion and take whatever comes. 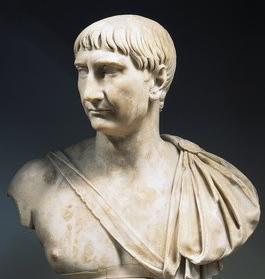 The family runs a state-authorized hotel, a mansio.  Aurelia is Roman-educated, witty, clever, snarky at times, comfortably well-off, strong-minded, and values her independence.  She also embraces fully the sadistic Roman society's evils of slavery and capital punishment, and possibly more of Rome's nastiness.

I like my Ancient Roman series protagonists to possess more compassion, so Aurelia is not my cup of tea.  That does not mean she won't be yours, or that the books are not well-written.  They are well-written, and well-edited (I noticed only a handful of typos).

There are four books in the Aurelia Marcella Roman Mystery Series: 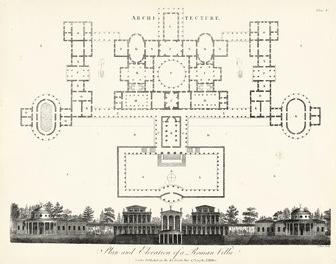 Plan and Elevation of a Roman Villa

I've read Danger in the Wind, which is the fourth book in the series.  The readers are brought quickly up to speed on what they need to know about the protagonist and the recurring characters.  Aurelia's family takes center stage:  her twin brother, their sister, a cousin, various partners.  And we meet the neighbors of the hotel, and the employees and slaves.

One oddity is how the author appears to equate the Ancient Romans in Britain to the British Raj period in India.  I recall the filming of the classic novel, The Eagle of the Ninth (reviewed on this site), the film entitled The Eagle, in which the director thought the Romans in Britain were more like the U.S. and her allies in Viet Nam.  I suspect the author of Danger in the Wind's interpretation is more accurate. 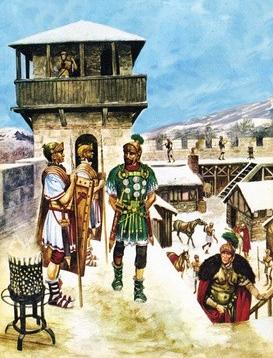 A Roman army fort in Britain, a setting in the book

The book starts out quickly with a murder, and another happens roughly halfway in the book, followed by...well, I'll leave that to you to find out.  Aurelia is drawn into the investigation, with the support of her "lover" Quintus, an Imperial Investigator.  The word "lover" is odd, and used by the narrator to describe her relationship with Quintus, because all the loving Quintus and Aurelia appear to do is kiss. 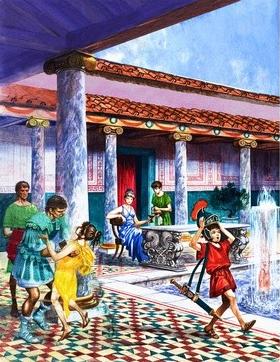 There is lots of history in the book:  culinary, clothing, running of the empire, travel, communication, taxes, marriage, religion, medicine.  The relationship of the Romans to the indigenous Celts plays a large part in the book, too, with a potential rebellion in the background.

The book has a cozy (or cosy, since this is a British English author) feel to it:  lots of suspects, an amateur detective sleuthing and getting into a danger but discovering the solution to the mystery in the end.  The Ancient Roman settings makes it all a bit less cozy, with slavery, corporal punishment, misogyny, pedophilia, etc. etc.  I think it is an odd mix, but it is one that some people seem to enjoy.  I have reviewed many Roman Series here on this site that could be called "cozy"! 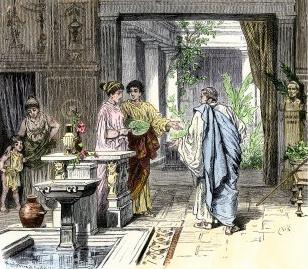 A fine summer in 100 AD and good government under Trajan Caesar promise well for the Roman settlers in the frontier province of Britannia.

Aurelia Marcella runs a mansion on a busy road to York. June is always busy, but one day two unusual events occur: a soldier is murdered in his bed at the inn, and a letter arrives from Isurium, a small fort north of the city. It is from a cousin, Jovina, inviting Aurelia to a midsummer birthday party. But the missive also reads as a plea for help, referring to “danger in the wind.”

The murdered soldier also bore a message, locked in Aurelia’s strongbox, indicating violence would erupt at the very same fort on the day of the party.

At Isurium, Aurelia finds Jovina and her drunken husband and unruly children caught in a tangled web of greed, love, intrigue, and death. When violence engulfs the district, Aurelia suddenly finds herself in peril from enemies engaged in an anti- Roman plot and from family members bent on misguided or evil agendas of their own. This is the 4th in a series.

The Aurelia Marcella Roman Mystery Series is published in the U.K. by Head of Zeus Publishing.  They offer the 4-book series as an e-book bundle.

The Aurelia Marcella Roman Mystery Series is published in the U.S. by Poisoned Pen Press.

Direct link to the author's page at PPP 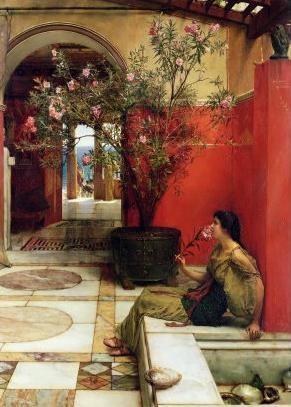 
Here is a stunning computer simulated tour of an Ancient Roman home: