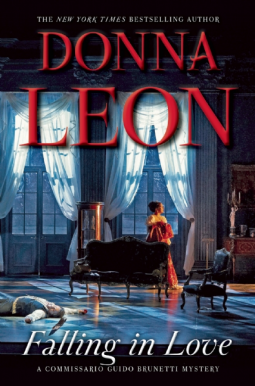 The latest books in this long police procedural/mystery series set in Venice, Italy, have read less like novels and more like novelizations of TV episodes.  Falling in Love is no exception.  The construction of the book is like an episode:  we meet the victim and see an incident, later the policeman is called in and he investigates, an action elevates the threat, and that threat continues until the exciting climax comes and the policeman leads the shaken woman home.

What we don't get is Brunetti acting in any way to save the day or the victim.  I think the story could have existed, with very little change, without Brunetti being involved at all, which is quite odd.  If you are a diehard Brunetti fan, you will get your scenes with his family, his co-workers, his boss, his parents-in-law, and scenes of Brunetti wandering the beautiful streets and bridges of Venice.  We even have the requisite comment: 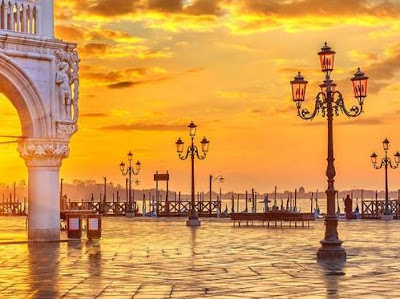 However, we spend much of the book in the mind and life of the opera singer, Flavia.  We learn much about the life of an opera diva in Falling in Love, which I received as a review-copy.  The catch phrases "Too much information" and "More than I wanted to know" popped into my mind while reading this book.  But if you are an avid opera fan, you may find those parts of the book interesting.

Flavia was an abrasive character introduced in the first book in the series, who made a return in a later book.  Her back story is more hinted at than mined in this story, making some of the references by the character confusing if you have not read the previous two books in which she appears.

Quickly:  she is a bisexual woman with an ex-husband and children, who had to give up her lesbian lover in order to not lose custody of her children during her divorce.  Her references to her past lesbian relationships are odd, to say the least, in Falling in Love, dismissing them as something akin to a hobby:  "having given that up".

...Griffoni asked with the deference beautiful women -- if they are intelligent -- use when dealing with women who are less attractive than they are.

And much of the book is not about a crime or criminal, but about how horrible fans of celebrities can be:

...all these people crowding round, all of them wanting something, to tell you something about themselves.  They think they want to tell you how much they liked your performance, but what they really want is to make you remember them.  Or like them. 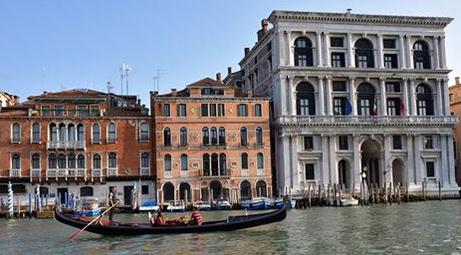 Most of the narration in the book is in third-person limited, but there is some omniscient narration, too.  The point-of-view is quite often Flavia's, but more often Guido Brunetti's.  Through Flavia's eyes, in the beginning of the book, we see Guido's trademark affection for his wife, his sense of humor and his self-deprecating attitude.  When we switch to Brunetti's point of view, we get to see how extremely observant he is, and how quickly he can read people.

The British single quotes in place of double quotes may annoy some readers.  And the abrupt ending will disappoint fans, just as it did in the previous book in the series.  The readers never gets to learn how the culprit managed the crimes.

The books in the Guido Brunetti Mystery Series: 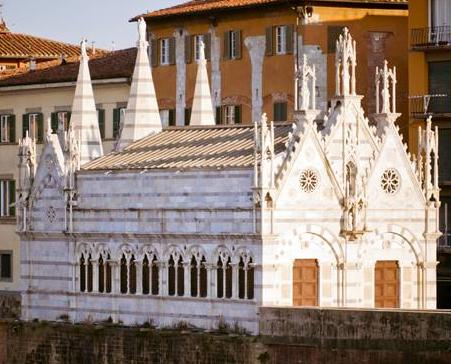 Donna Leon’s Death at La Fenice, the first novel in her beloved Commissario Guido Brunetti series, introduced readers to the glamorous and cutthroat world of opera and one of Italy’s finest living sopranos, Flavia Petrelli; then a suspect in the poisoning of a renowned German conductor.  Years after Brunetti cleared her name, Flavia has returned to Venice and La Fenice to sing the lead in Tosca.

Brunetti and his wife, Paola, attend an early performance, and Flavia receives a standing ovation.  Back in her dressing room, she finds bouquets of yellow roses; too many roses. Every surface of the room is covered with them.  An anonymous fan has been showering Flavia with these beautiful gifts in London, St. Petersburg, Amsterdam, and now, Venice, but she no longer feels flattered.

A few nights later, invited by Brunetti to dine at his in-laws’ palazzo, Flavia confesses her alarm at these excessive displays of adoration.  And when a talented young Venetian singer who has caught Flavia’s attention is savagely attacked, Brunetti begins to think that Flavia’s fears are justified in ways neither of them imagined.  He must enter in the psyche of an obsessive fan before Flavia, or anyone else, comes to harm.

Here is a direct link to the book at Amazon.com.