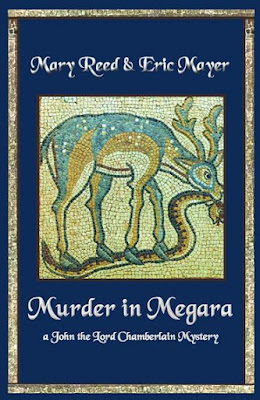 I love the originality of this murder mystery series, in a genre that often feels rehashed.  It is set during the Byzantine Era, when the Eastern Roman Empire was expanding after centuries of contracting.  The Emperor Justinian used brute force to reclaim all the bits and pieces that had once made up the Roman Empire, and brought them together again.

John, the protagonist of the series, of which this is book eleven, is a man who was enslaved, then made into a eunuch to work at the Byzantine court, the sexual mutilation a requirement of high civil servants at the time, a practice imported from the courts of Asia and Persia.

He worked his way up the bureaucratic ladder using his intelligence and clever skill, to reach the pinnacle, the Lord Chamberlain's position, Emperor Justinian's Chief of Staff, so to speak.  The top is always a dangerous place to be, especially in a political monarchy held together by military force. 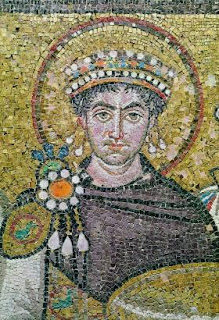 The books in the John the Lord Chamberlain Mystery Series:
The authors provide John with a richly imagined past and present.  In Murder in Megara, John is an exile from Constantinople, deemed a political enemy.  He is banished to his newly purchased property in Megara. Southern Greece.  That's where the story unfolds, rather than the busy capital which is the setting for the other books in the series. 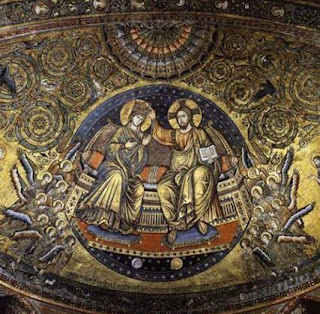 I loved delving once again into John's life.  It felt like I was catching up with an old acquaintance, a fascinating and clever acquaintance.  The writers, as always, make the setting both exotic and familiar.  This series is a treat for fans of both historical novels and murder mysteries.

Murder in Megara shows that John's life after his exile, and after the confiscation of most of his wealth and property, is still precarious.  He is under surveillance, since the usual fate of men like him was death.  John should count himself lucky, which he does, since he is still surrounded his friends, employees, and the love of his life, a cast of characters readers of the series will know well.

John suffers from the paranoid gossip and xenophobia of the locals.  He faces much local hostility:

We don't need a new landowner, especially one who'll actually live on his estate, meddling and upsetting things. 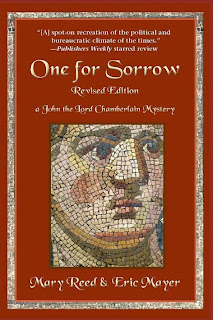 What did a farm estate produce in those days?  Honey, olive oil, wool, crops, live stock were common commodities, just as they were from Ancient Roman times up to the industrial revolution, when specialization pushed many small farmers out of business.  That existence is well portrayed in the book.

Something that has always endeared me to John is that he refuses to employ slaves, since he was once one, and he cannot bear the indignity that it inflicts on the soul of the enslaved.  Since he chose to live modestly in Constantinople, he could indulge his principles regarding slavery, but when he becomes an active estate owner, there are economic pressures that come to bear on him, but his principles stand firm.  I'm glad, because I would hate to start disliking John now. 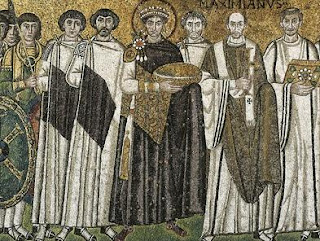 My advice is to avoid the book descriptions of the series books and this book, since they always contain spoilers, especially in the mystery genre.  Just go for it.  Read and enjoy the story as it develops.  Enjoy the rich cast of characters, too, who the capable writers portray distinctly and imaginatively. 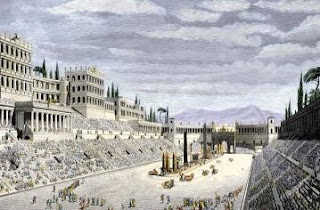 John, former Lord Chamberlain to Emperor Justinian, has been exiled from Constantinople to a rustic estate John has long-owned in Greece, not far from where he grew up.  But exile proves no escape from mystery and mayhem.

The residents of nearby Megara make it plain John and his family are unwelcome intruders.  His overseer proves corrupt.  What of the other staff—and his neighbors?  Before long, John finds himself accused of blasphemy and murder.

Now a powerless outsider, he’s on his own, investigating and annoyingly hampered by the ruthless and antagonistic City Defender who serves Megara as both law enforcer and judge.  Plus there’s that corrupt estate overseer, a shady pig farmer, a servant’s unwelcome suitor, a wealthy merchant who spends part of his time as a cave-dwelling hermit, and the criminals and cutthroats populating such a seedy port as Megara.

John realizes that in Megara, the solution to murder does not lie in the dark alleys where previous investigations have taken him, but in a far more dangerous place—his own past.  Can he find his way out of the labyrinth of lies and danger into which he has been thrust before disaster strikes and exile turns into execution? 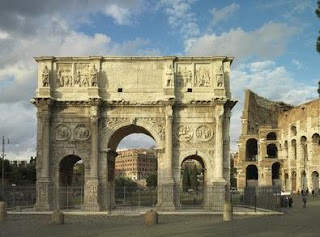 Here is a direct link to the book at Amazon.com