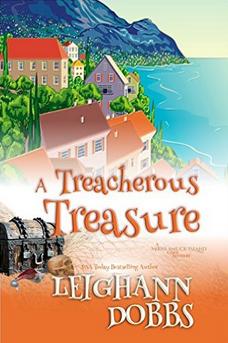 Dominic Benedetti and Claire Watkins are the two police consultants who've retired to Maine's Mooseamuck Island in this cozy mystery series.  Book three in the series has the mature duo embark on an investigation into a very old murder mystery that is linked to pirate treasure.  It also is linked to an old friend of Claire's, which pushes her to investigate further, with Dom's help.

Italian-American Dom Benedetti, and the Italian-American police detective, Zambuco, who sometimes allows the retired duo to help with a case, add some Italophile flavor to the stories.  Dom, especially, is very fond of Italian pastries which he uses to numb the pain of the loss of his beloved wife.  Claire aims for a healthier lifestyle. 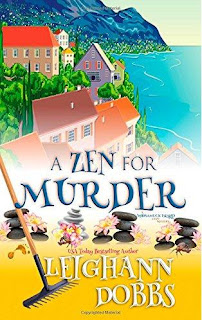 
The mystery story begins right away with the discovery of a body.  The book follows the cozy genre norm of clues, suspects, theorizing, another murder, and the resolution that involves some danger for our amateur detectives and their loved ones.

The author is very good about bringing readers up-to-date on the regular cast of characters, the setting, and events from the previous two books in the series.  I would suggest reading the books in order.


The books in the series are: 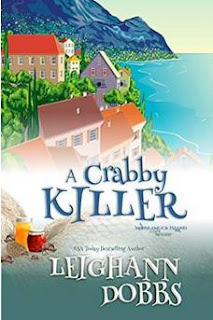 Quiet Mooseamuck Island is at times too quiet for Dom and Claire, so the crimes that occur liven up their retirement considerably.  While the police detective doesn't usually invite them to consult on investigations, the duo often use the poor man as an excuse for getting involved.

...you know what can happen with Zambuco.  He's liable to incarcerate the wrong person!

A cat and pet canaries keep the retirees company, and even seem to contribute to conversations at time.  That's just part of the light note the author likes to keep for this very cozy cozy-mystery.

The writing is clear, direct, not difficult, and all the loose ends are wrapped up nicely at the end, including a clear explanation of the case.  The setting is picturesque, and the there are some lovely descriptions of the views and homes.  This book, and the whole series, is pleasant, clean, easy-reading, relaxing fun. 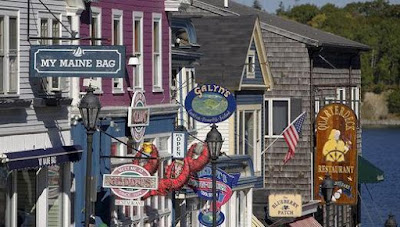 Rumor has it that Captain Kidd buried treasure on Mooseamuck Island. But when an old pirate chest is unearthed, the contents reveal a deadly surprise that plunges the island into the middle of a sixty year old murder mystery.

With fingers pointing at several of our favorite Islanders, Dom and Claire must team up once again to get to the bottom of things. A twisty path of suspects and clues, brings them to the horrifying realization that one of their closest friends may be involved.

When another murder strikes fear into the hearts of the Islander's, Dom and Claire team up with an unlikely ally in order to save the island from a dangerous killer who thinks they can get away with murder. 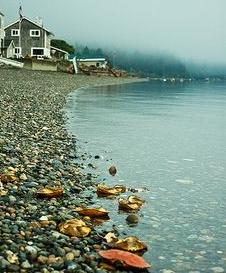