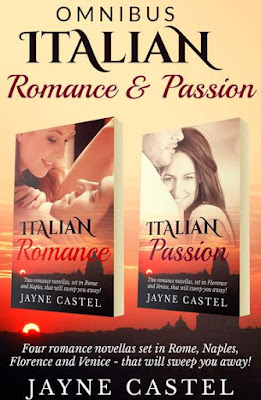 These are four realistic-feeling tales whose romantic stories begin, as many modern love stories do, with passion and a strong physical attraction. However each couple featured in the stories has the potential build their relationship into a more loving and lasting one.

In each story the female protagonist is a woman from an English-speaking country visiting Italy for family, pleasure and work, and she becomes involved with an Italian man.

The four short romance stories in the Omnibus: 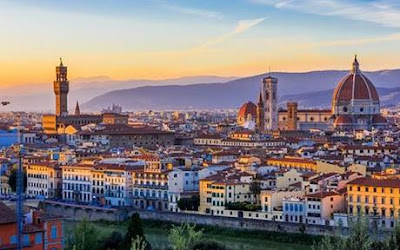 Each story is well-written escapist fiction that moves along quickly with just enough detail to put the reader in Italy and in the interesting scenes. The author is clearly familiar with Italian culture and language, which adds more realism to the stories.

I especially enjoyed the realistic portrayal of the western women's point of view on Italy. The protagonist of A Roman Summer, for example, is a first time visitor to Italy. Her first impressions when exhausted concern women's struggles with sexual harassment, the heat in summer, the difficulty of managing uneven cobblestones in heels, the horrible traffic and the deafening noise.

The protagonist of Neapolitan Encounter thinks at one especially difficult point in her story:

She'd just about had enough of Italian men today. 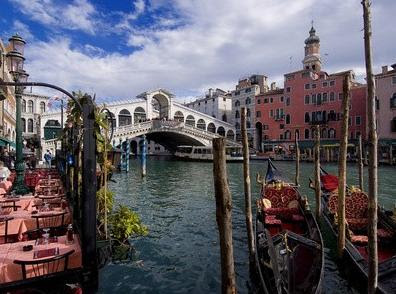 When the women are rested they notice the many fashionable men, the ever-present facade in behavior, the sexual directness and volatile expressiveness of many Italians, and the beauty of the non-modern architecture. They notice the food, too, of course. Each of the women show their appreciation for the food, with one protagonist thinking:

The men could be odious here but the food was incredible.

Eventually she learns to appreciate the good qualities of one Italian man in particular.

Like all good short stories, the endings stimulate the readers' imagination to invent their own future for the protagonists, with the writer providing clues to use as starting points. The books are clean with no sex scenes detailed, only suggested. I enjoyed the short escapes to Italy very much! 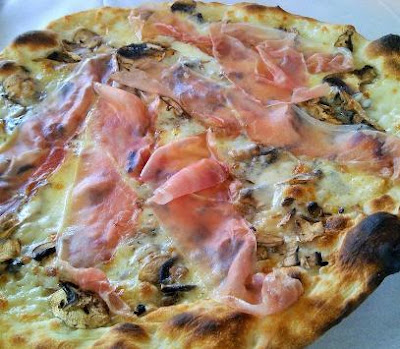 A collection of contemporary romance novellas set in Rome, Naples, Florence and Venice - that will sweep you away!

From Rome's dolce vita and the gritty streets of Naples, to the rolling hills of Tuscany and the twisting canals of Venice, four 'must-reads' for romance fans who are passionate about Italy.

Kay Starling visits Rome with the hope of persuading her sister to give up her Roman lover and return home to her responsibilities. However, she hadn't counted on falling for Alessandro Falcone - the brooding brother of her sister's lover...

Luisa Durasanti witnesses a mafia shooting on the streets of Naples - an incident that turns her dream holiday into a nightmare. Of course, her attraction to Commissario Valerio Catanese, the enigmatic police inspector in charge of the investigation, is just an added complication...

Vanessa Woods' romantic holiday in Tuscany with her boyfriend is quickly turning into a disaster. When her relationship disintegrates, it takes a few days in Florence, and a young chef named Marco Tirelli to take Vanessa's Tuscan holiday in an entirely unexpected direction...

Faye Wilson is in Venice for the Biennale, to do a story on one of Italy's most promising young artists - Massimiliano Paolini. When the interview escalates into an argument, Faye storms off, determined never to set eyes on Max Paolini again. However, she doesn't suspect what the evening has in store for her... 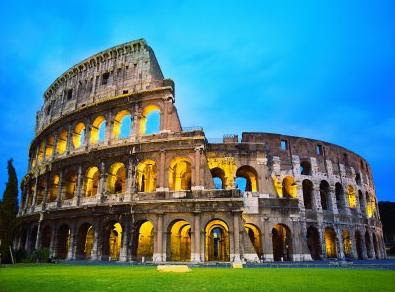 Here is a direct link to the Omnibus at Amazon.com: