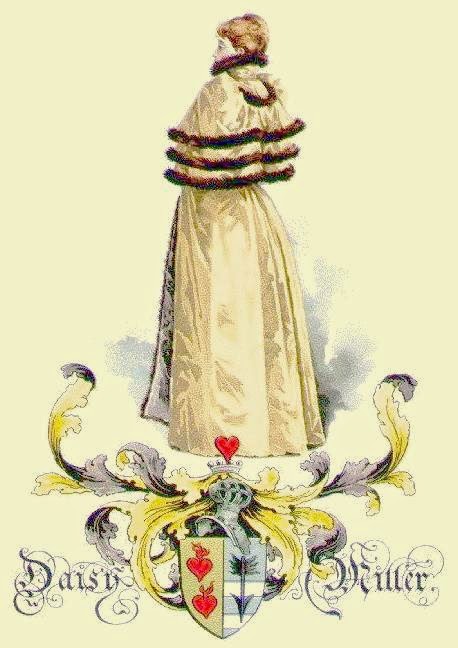 This classic novella from 1879, roughly fifty pages long, is by America's foremost novelist, Henry James (b.1843-d.1916), a master of the psychological novel.  The novella is in the public domain, so it is free to download as an e-book from a source I provide below.

You may know Henry James as a writer of heavy, dense prose, but this novella is closer in style to writer Edith Wharton:  conversational, gossipy, often humorous description of relations between men and women of a certain class during the Belle Epoch, with a serious ending. 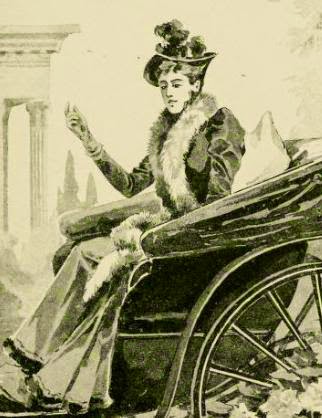 Illustration of a woman offering her help to Daisy, from an illustrated book version of Daisy Miller, free PDF link below

The novella is written in two parts.  The first part of the novella is set in Vevey, Switzerland, a favorite resort location for travelers on the Grand Tour of Europe, next to Lake Geneva, and a stopover before taking the journey through the Alpine passes into Italy.  The second part of the novel is set in Rome, Italy, which was generally the stop before Naples and Pompeii for the Grand Tour tourist.

Rome, Italy, in 1879 is unlike Rome of today.  The Roman sights were open to the public without any fee, and without any closing times.  But it was also home to malaria, in that time before D.D.T. spraying.  A visit to Rome could be deadly. 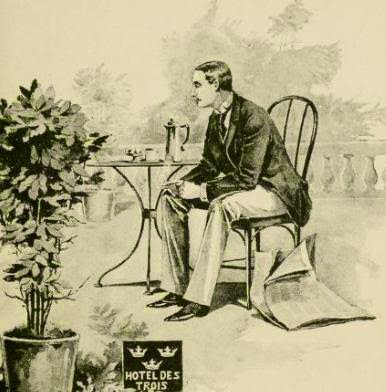 Illustration of the narrator, from an illustrated book version of Daisy Miller, free PDF link below

The narrator of the novella is Winterbourne, a spoiled, rich, indulgent, lazy young man, who spends most of him time courting older women in Switzerland.  Winterbourne tells the story of his acquaintance with Annie P. Miller (Daisy Miller), a poorly educated, spoiled, wealthy American woman with an unpolished character and a coquettish demeanor, and an Aspergers-like incomprehension of social niceties and acceptable social behavior.

Daisy is rather brainless.  To her, Europe means hotels, trains, new dresses in Paris.

...Europe was perfectly sweet.  She was not disappointed--not a bit.  She had ever so many intimate friends that had been there ever so many times.

And then she had had ever so many dresses and things from Paris.  Whenever she put on a Paris dress she felt as if she were in Europe.

Here is a clip from a 1974 film-adaptation with a truly awful performance by Cybil Shepard, but it does stick very faithfully to the book, and it was filled on location, this scene at Vevey, Switzerland.

Illustration of an Italian fan of Daisy's, from an illustrated book version of Daisy Miller, free PDF link below

Winterbourne meets Daisy at Vevey and writes her off as a pretty American flirt with low morals, or at least rather dense, thick, unsophisticated in the way of the world, and the in the rules of propriety.

...an extraordinary mixture of innocence and crudity...

...continued to present herself as an inscrutable combination of audacity and innocence... 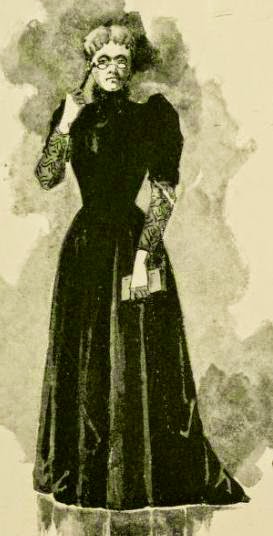 Illustration of a critic of Daisy's, from an illustrated book version of Daisy Miller, free PDF link below

Daisy's mother and young brother are equally dense and inappropriate.  Daisy's mother is like a doormat for her strong-willed, spoiled daughter.  Daisy's beauty and wealth has insulated her from much of the criticism that her behavior causes.  But we learn that fashionable New York City society has deemed Daisy uncouth, the product of new money from the girl's businessman father.  She is the like the daughters on MTV's Sweet Sixteen show, raging idiots untamed by their cowed, new-money mothers.

Henry James's story of Daisy Miller's dangerous folly was a common theme at the time.  Other books warned new-money mothers and young women and their fathers of the dangers they ran trying to fit into high-society without understanding the rules of behavior:  The Hazards of New Wealth by W. D. Howells, The Sword of Damocles by A. K. Green, The House of Mirth by Edith Wharton, to name a few. 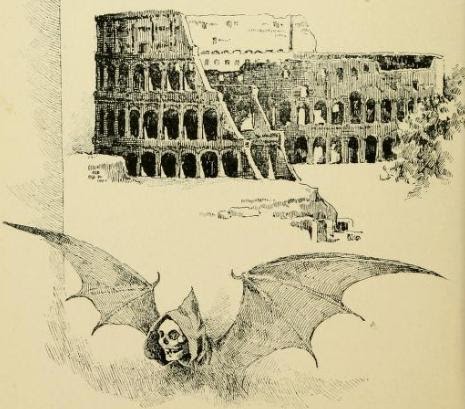 Illustration depicting the dangers of malaria in Rome, from an illustrated book version of Daisy Miller, free PDF link below

Daisy Miller, as described by Henry James, is a classic Aspergers.  She has an attractive face, an expensive wardrobe, a limited range of emotions, and she is clueless about societal norms and accepted behaviors.  She cannot understand social clues or cues.  But her wealth and beauty have given her an arrogance and self-assurance that takes blows when her poor decisions have serious consequences.

It is an interesting and even entertaining read, written in a lighter style than usual for Henry James.  The depictions of people and their psychology always rings true.  The portraits of expatriate life in Switzerland and Rome in the late 1800s are drawn by a man who knew the locales well.  If you enjoy Edith Wharton, you will enjoy Daisy Miller.

Buy This at Allposters.com

A still-image from a 1974 film adaptation of Daisy Miller


The novella Daisy Miller is in the public domain and available to download for free in various e-book formats from Project Gutenberg, the grand-daddy of free e-books on the Internet.

If you wish to see the book as it was originally published, with beautiful illustrations, and download a PDF book made from the scanned paged for free, here is the link at the Internet Archive, a wonderful resource for free e-book on-line.

Henry James adapted the novella for the stage, changing the sad ending for a happy one, in an attempt to pander to theatre-goers.  If you are interested in this version, here is a direct link to the un-produced play as it was printed in a book, available for free as in various e-book formats, including a PDF of the scanned pages of the original book, at the Internet Archive.

If you are interested, here is a link to the Wikipedia page for Daisy Miller, but I suggest you read the novella first, form your own opinion, then read the page, or other critical articles about the story.

If you wish to purchase a print version of Daisy Miller, or the 1974 film adaptation, here are direct links to the products at Amazon.com.