The Florentine/Venetian Painters of the Italian Renaissance by Bernhard Berenson 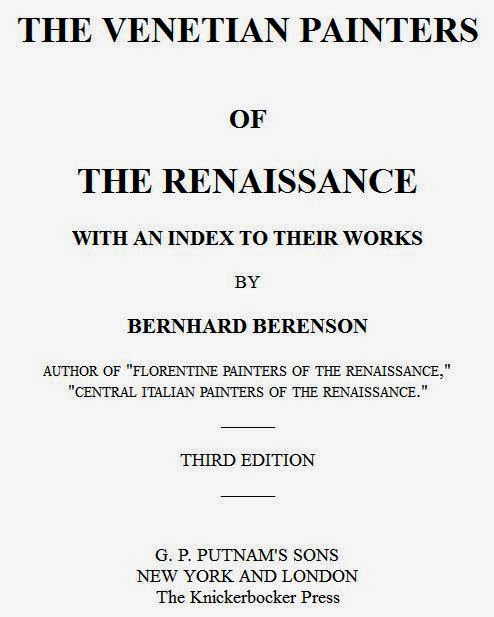 These are two books of roughly 100 pages each, with half the pages being indices of the paintings with their locations around the world, in private and public collections.  The books are in the public domain, so they are free to download as e-books from an on-line source, which I provide below. 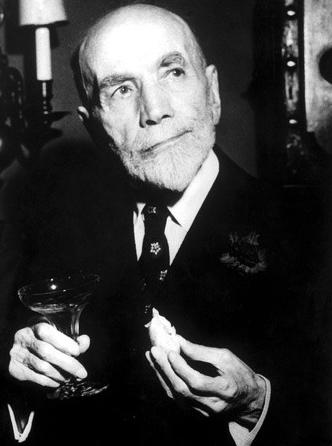 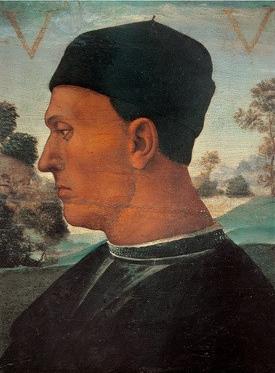 Berenson's Florentine villa, I Tatti, is an art study retreat run by Harvard University, to whom Berenson willed the estate upon his death, the estate included many artworks from the Florentine School, including this one

Today, the indices are outdated, but the essays that precede the indices are still fascinating and informative for anyone interested in Italian art and Italian artists.  Berenson's authoritative character shines through the essays, seeming to our modern sensibilities to be arrogant, but his true joy in discovering new art and artists moderates that fault of ego. 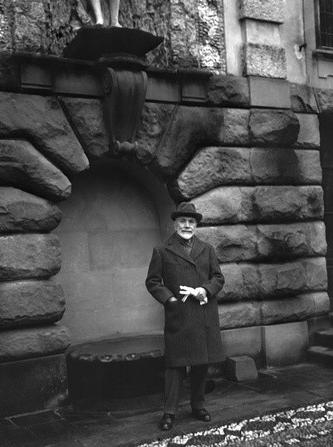 Giotto to Michelangelo; the beginning of Florentine Renaissance art to the end of it.  The Florentine school, as pointed out by Berenson, was unique in that an artist was trained to be a painter, sculptor, draftsman, architect, metalworker, poet and a man of science.  Such a school/training was bound to uncover a genius or two, a Renaissance man, great personalities, like Michelangelo and Leonardo da Vinci. 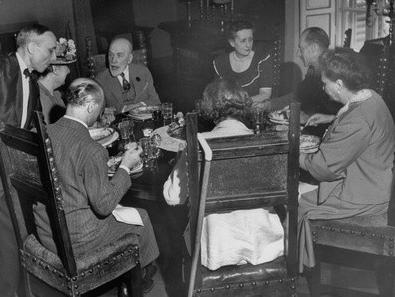 Berenson tells us why each artist's work is important and offers comparisons and influences on the man's work.  Michelangelo, the longest-lived of all the artists, has the honor of having his death generally seen as the date the Renaissance ended for Florentine art.

According to Berenson, Michelangelo's adoption of the Greek love of nudes provided the inspiration for the artist's greatest works, and:

...in him Florentine art had its logical culmination. 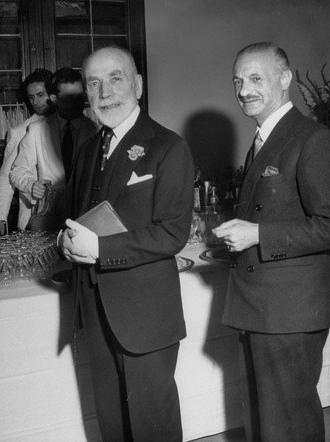 Berenson provides a strong defense of nudes in art, something at issue during his day.  He claims:

Michelangelo joined an ideal of beauty and force...[in his nudes].  Manliness, robustness, effectiveness, the fulfillment of our dream of a great soul inhabiting a beautiful body...in the figures of the Sistine Chapel.

Interestingly, Berenson states that because Michelangelo was famously not humble or patients, the artist had difficulty portraying those characteristics in his art. 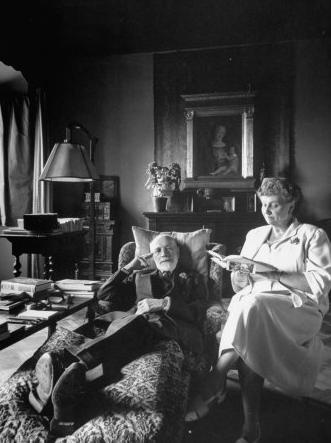 Berenson at Villa I Tatti

Florentine artists managed to have:

...emancipated themselves from ecclesiastical dominion...

When they found the deep pockets of wealthy merchants, the secular patrons made the artists' work more "energetic", or more secular, less dominated by the church.

Florentine artists left us with art that rendered the most tactile values, the most sensuous figures, in their paintings, sculptures and drawings, according to Berenson. 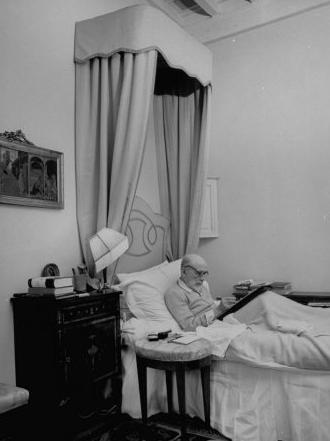 Berenson in bed at Villa I Tatti

I found the Venetian book more interesting than the Florence book.  For Berenson, Venetian painting is:

...the most complete expression in art of the Italian Renaissance.  ....youth, intellectual curiosity, energy, grasping at the whole of life.

The Venetian school's greatness, founded on master colorists, lasted longer then the Florentine school of art, and it influenced visiting artistic greats from Flanders, Holland, Germany, Spain and England.

In the essay, written in the late 1800s-early 1900s, Berenson mentions the "new critical method" of art study, that relies on science to authenticate, study and deconstruct paintings. 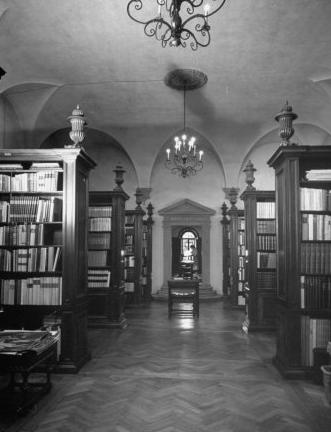 Berenson writes that the Renaissance was like a young person's post puberty "awakening to the sense of personality" a striving for meaning, character, learning, growing, knowledge, throughout Europe, but in Italy first.  There was an admiration for human genius and achievement, a birth of the cult of individualism, away from the collectivism of the Middle Ages.  Love of glory became the new religion.

None of that would have been possible without the growth of patronage from the rich and powerful who wished to live on in posterity through the buildings, books, statues and paintings for which they paid. 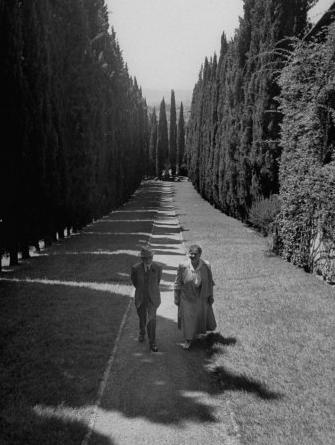 Berenson in his Villa I Tatti Renaissance gardens

The Middle Ages were a time of deprivation.  After the starvation and death of that era pasted, the survivors and their descendents wanted to celebrate life through finery, glory, knowledge, celebrations, pageants and good health.  New inventions made life easier; people lived longer and healthier lives.

...was the only state in Italy which was enjoying, and for many generations had been enjoying, internal peace.  This gave the Venetians a love of comfort, of ease, and of splendor, a refinement of manner, and humaneness of feeling, which made them the first really modern people in Europe. 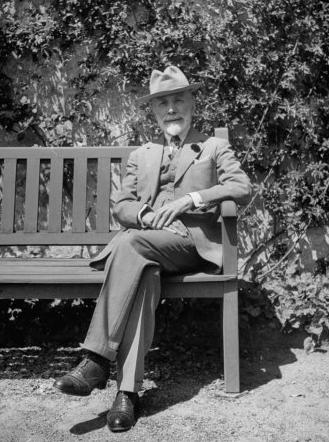 Berenson in his Villa I Tatti gardens

Painting was less dominated by the church.  Venetian paintings featured more secular subjects, even if they were nominally disguised as religious paintings to get around the Inquisition's censors who had to approve all books and works of art.

Specifically, Venetian art is known for the mass appeal of the paintings, the atmospheric skies, the strong foreground objects and people, the fading out of the objects in the distance.

The Venetian state was a prime source of commissions for paintings to decorate the state buildings, and to commemorate the state's victories and pageants.  The state's glory lead to individual Venetians wanting to commemorate their own glory, so easel paintings rather than murals took off for display in homes.  Intimate subjects like portraits or depictions of events from fables and novels, such as those painted by Giorgione, were prized by wealthy Venetians. 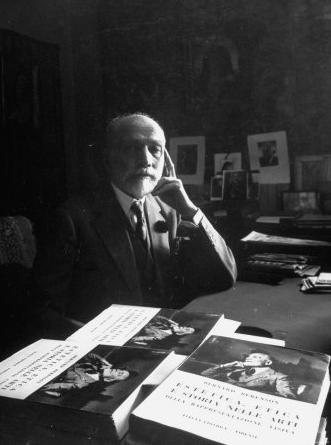 Berenson and his ego on display at his desk, surrounded by his books, which has been shown were co-written by his wife

The most provocative line in the book is:

...toward the middle of the sixteenth century, when elsewhere in Italy painting was trying to adapt itself to the hypocrisy of a Church whose chief reason for surviving as an institution was that it helped Spain to subject the world to tyranny...

Spain was a world power by then, made so by its pillage of the Americas and decimation of the Americans, which was infamously approved of by the Catholic Church, so it was only natural that Venetian artists were drawn to the Spanish court for work.  That is how the Venetian school of art continued on in the work of Spanish artists like Goya.

With our twenty-twenty hindsight, we can see that Berenson's last line, written circa 1910, tells of the unsuspecting minds that had to face two world wars and atrocities that modern man had thought consigned to antiquity:

We, too, believe in a great future for humanity, and nothing has yet happened to check our delight in discovery or our faith in life.

You can download various e-book editions of the two books, for free, from Project Gutenberg, the grand-daddy of free e-book sites on the Internet.

If you are interested in learning more about Bernard Berenson, here is a place to start:


And here is another informative link at the Dictionary of Art Historians from the perspective of Mary Berenson, Bernard's long-suffering and deluded wife.