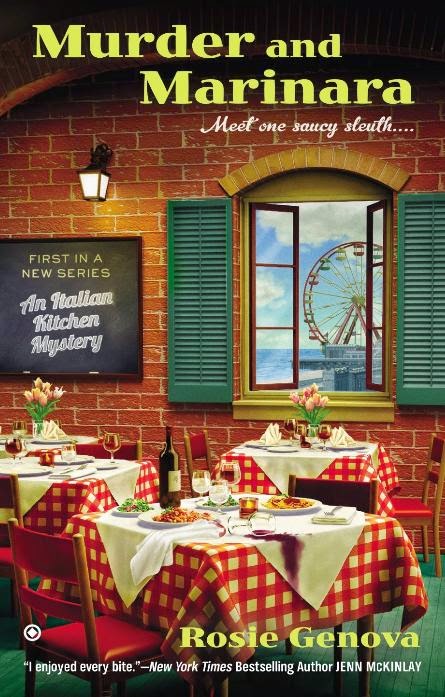 Murder and Marinara is the first book in The Italian Kitchen Mystery Series, a cozy-murder-mystery and romance series set on the Jersey Shore, in the state of New Jersey in the United States.

The series' protagonist is Victoria Renzi, whose pen-name is Vick Reed.  Vic has a pen-name because she is the author of a series of cozy-murder-mysteries that feature the amateur sleuth Bernardo Vitali.  Vic is our first-person narrator of the book, guiding us through her adventure with a dry sense of humor. Vic's family is Italian-American.  They have owned and run a family restaurant, Casa Lido, in a New Jersey seaside community for two generations, and hope to have a third generation take over the business.  But Vic and her brother, a local policeman, have other ideas.

The book starts quickly, expertly setting the scene, and introducing us to the various characters in the Renzi family, and to people linked with the family restaurant.  After eight years living and writing in New York City, Vic returns home to research a book.  She must face not only her high-pressure family, but her ex-lover, too.

The matriarch of the family is Nonna, grandmother, who is the eighty-year-old founder of Casa Lido.  Nonna is a formidable woman, who resembles her strong-minded grand-daughter, leading to many fun clashes between the two women.

Vic understands her Nonna, as she tells her supportive brother, Danny:

I don't need a translator, Danny.  I am well versed in Nonna-ese.

And even Nonna's silences are well-understood by Vic:

Nonna stared out the the front window, no doubt putting a curse on Parisi.

Vic grits her teeth in the face of her tough Nonna, but Vic has enough self-understanding to admit that Vic has an "inner Nonna" herself. 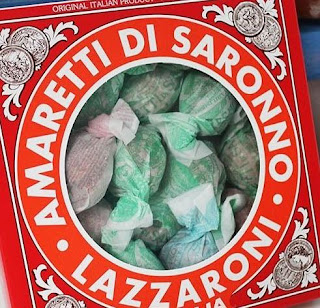 The Renzi family jumps off the pages with life, easy to visualize and easy to understand.  If you are from that area of the world, you will probably enjoy the story even more, since the locations and people will be instantly recognizable to you.

The story moves along swiftly.  It is a solid, by-the-book, cozy-murder-mystery:  clean, fun, comforting, with light humor and light romance.The murder that occurs is a disaster for the Renzis so Vic gets involved in the investigation to help her family.  Vic questions suspects, ruminates on the case with a side-kick, and eventually resolves the case with an exciting finish. 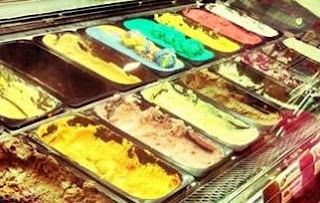 What is not resolved at the end of the book is Vic's love-life, which true-to-life, is more difficult to resolve than murder.  Vic is not lacking in interesting, handsome men to complicate her life, but the reader will have to wait for the next book in the series to see if any man will get more than a foot in the door with cautious Vic.

Murder and Marinara is full of lots of love for the Jersey Shore and for Italian food and for Italian-American culture, which is why I requested a review-copy.  There are even recipes at the end of the book, including the titular Marinara Sauce.  This is a book for Italophile cozy-enthusiasts! 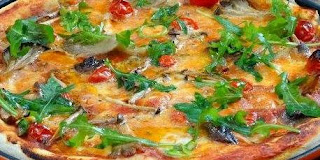 From the book's description, which gives a bit too much away:

Hit whodunit writer Victoria Rienzi is getting back to her roots by working at her family’s Italian restaurant. But now in between plating pasta and pouring vino, she’ll have to find the secret ingredient in a murder....

When Victoria takes a break from penning her popular mystery series and moves back to the Jersey shore, she imagines sun, sand, and scents of fresh basil and simmering marinara sauce at the family restaurant, the Casa Lido.  But her nonna’s recipes arent the only things getting stirred up in this Italian kitchen.

Their small town is up in arms over plans to film a new reality TV show, and when Victoria serves the show’s pushy producer his last meal, the Casa Lido staff finds itself embroiled in a murder investigation.  Victoria wants to find the real killer, but there are as many suspects as tomatoes in her nonna’s garden.  Now she’ll have to heat up her sleuthing skills quickly…before someone else gets a plateful of murder.

First in a new series! 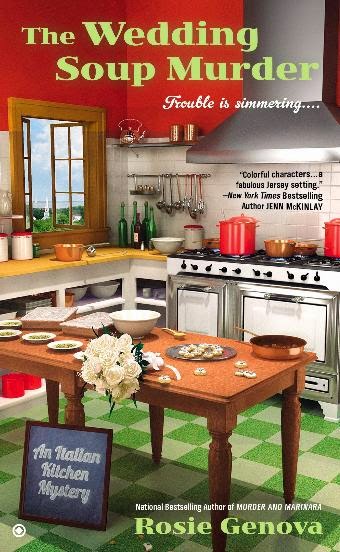 Book 2 in The Italian Kitchen Series is Wedding Soup Murder.  Here is the book's description, which has spoilers:

Victoria Rienzi came home to the Jersey Shore to write a new book, learn the family restaurant business, and practice the fine art of Italian cooking.  But when delicious dishes are paired with murder, Vic has a little too much on her plate…

When Vic asked her nonna for more responsibility in the kitchen, she didn’t mean forming a thousand tiny meatballs by hand for the family’s famous wedding soup.  The dish is to be served at the reception for a close family friend at the exclusive Belmont Country Club.  And once there Vic has to deal with a demanding bridezilla and clashes in the kitchen—between the staff and servers, between two egocentric head chefs, and between the country club president and…well…everyone!

The wedding comes off without a hitch—until the body of the club’s president is found on the beach below a high seawall.  Now Vic will need to use her noodle to find out who pushed whom too far…before she’s the one who lands in the soup!

The Italian Kitchen Mystery Series is published by Obsidian, a Penguin Group USA subsidiary that specializes in cozy mysteries.

Direct link to Murder and Marinara at Penguin

Here are direct links to Murder and Marinara at Amazon.com: