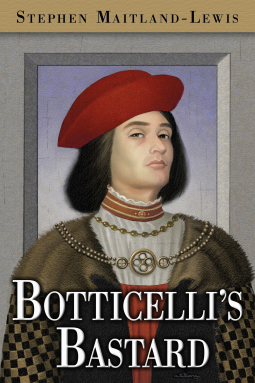 The novel Botticelli's Bastard is hard to categorize.  It is part farce, historical novel, paranormal novel, love story, mystery, and drama.  All the parts somehow come together to create a satisfying whole.  The whole is the story of Giovanni Fabrizzi, an Anglo-Italian art restorer living in London, who inherits a talking Italian Renaissance portrait painting.  What the man in the painting has to tell Giovanni is often disturbing.

Giovanni's behavior had changed dramatically since he had opened that crate.  He felt haunted.

The changes that the painting makes in Giovanni's life are, at first, mainly comic, with a fun jaunt through history.  But halfway through the book, the story takes a decidedly darker turn, leading to a bittersweet but satisfying ending. 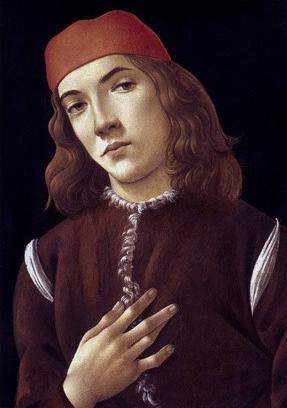 On this page, I show many portraits by Sandro Botticelli.

The second half of the book deals with event that happened in Europe during the Second World War in relation to the robbing and killing of Jews.  Giovanni follows up on what the man painting tells him, and discovers upsetting things about the previous owners of the painting.

It was one thing to see the worn, black and white footage on a television program...But touching the paper, confirming the Meyerstein's transfer to Auschwitz, and knowing the gruesome manner in which the good people had perished...it put an echo of that terror into his heart and mind that would not leave him, ever, from that day forward. 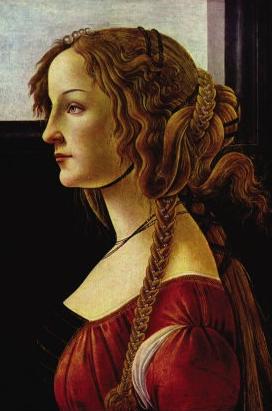 Wealthy Giovanni is not the most sympathetic of characters, and I found his troubles with his thirty-year-younger second-wife more icky than interesting, with a very unrealistic, or delusional, ending, in my opinion.  But the life of a first generation Anglo-Italian in London was enough to keep me reading (it was enough for me to request a review-copy).  True to his cultural upbringing, Giovanni seeks out human contact and a sense of community, as well as treats from Italy, like good food, coffee and gossipy news.

The title of the book, Botticelli's Bastard, is a description the man in the painting gives to himself.  He is a vain and arrogant minor de' Medici (annoyingly, the book spells de' Medici without the necessary contraction comma).  The man claims his portrait was painted by Sandro Botticelli during the Italian Renaissance in Florence, Italy. 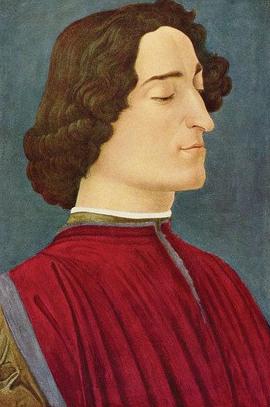 Most of the humor in the story comes from the interaction between Giovanni and the man in the painting, a painting Giovanni inherited from his father.  The family connection is key to the story, and if you want to really enjoy the story, I would suggest you avoid reading the official book description, since it contains many spoilers.

The author's prose is straight-forward, clear and a pleasure to read.  The book is well-edited (except for the de' Medici error!).  The narration is third-person limited, letting us into Giovanni's head.  Botticelli's Bastard is an enjoyable mystery about a amateur detective who, with the help of the supernatural, discovers some dark secrets about his own family. 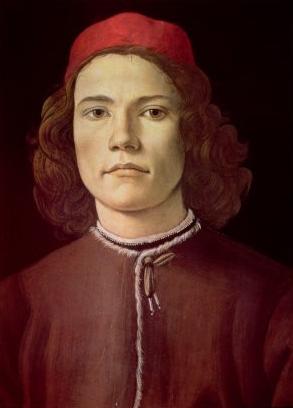 The following book description, which comes from Amazon.com, oddly omits to mention the paranormal aspect in the novel:  the speaking portrait painting (is it just me, or does the portrait made for the book cover look like the author in Renaissance costume?).

From the book's description (many spoilers):

Art restorer Giovanni Fabrizzi is haunted by an unsigned renaissance portrait.  Obsessed to learn the truth of its origin, he becomes increasingly convinced the painting could be the work of one of history's greatest artists, which if true, would catapult its value to the stratosphere.

But in learning of the painting's past, he is faced with a dilemma.  He believes the portrait was stolen during the greatest art heist in history -- the Nazi plunder of European artwork.  If true and a surviving relative of the painting's rightful owner were still alive, Giovanni, in all good conscience, would have to give up the potential masterpiece.

His obsession with the portrait puts a strain on his new marriage, and his son thinks his father has lost his mind for believing an unremarkable, unsigned painting could be worth anyone's attention.  Regardless, Giovanni persists in his quest of discovery and exposes far more truth than he ever wanted to know. 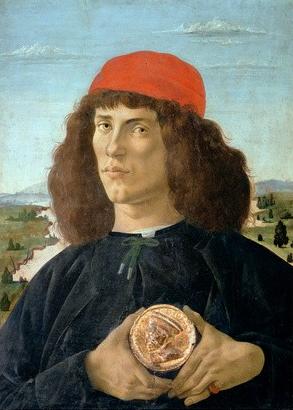 A portrait of Botticelli's brother, a goldsmith, the man who probably made the medallion of Cosino de' Medici that he is holding.  Notice the cleft in the chin?  It is a Botticelli family trait (and a Lippi one which has caused some to suggest Sandro and perhaps his brother were illegitimate children of the randy priest, Fra Filippo Lippi).

Direct link to the book at GEP


Here are some links to books about the Italian Renaissance artist Sandro Botticelli at Amazon.com:


Here is an interview with the author about Botticelli's Bastard at YouTube: