Michelangelo, A Life in Six Masterpieces by Miles J. Unger 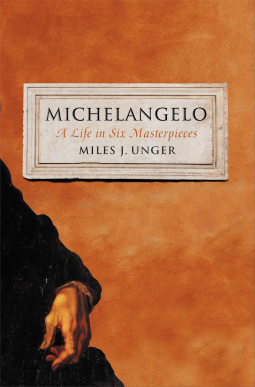 In Michelangelo, A Life in Six Masterpieces the reader is treated to 400+ pages about the life and work of the Italian Renaissance artist Michelangelo Buonarotti.  The author sketches the long life of the painter-sculptor-architect, but zeros in on six masterpieces created by Michelangelo, to share with the reader vast amounts of details about how the pieces came into existence.

The book proceeds chronologically, beginning with the early life of Michelangelo.  Along the way to the six masterpieces, the minor works by the artist are discussed briefly.  And all the people who were important in Michelangelo's life are included in this book which is for real Michelangelo fanatics. 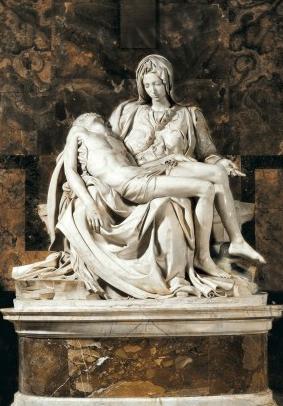 These are the chapters in the book, but they are deceptive, as they are really only time dividers in the long life of Michelangelo. 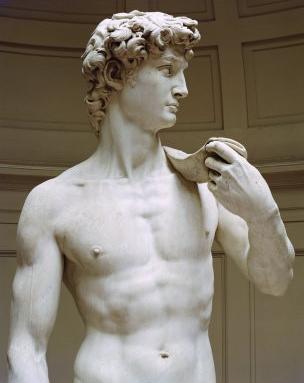 The author points out that the Italian Renaissance was an attempt to reclaim the glories of the past, glories that had declined during the Middle Ages, and that were at risk of disappearing altogether.  These glories included the collections of ancient manuscripts, copying them, translating them, and disseminating their contents.

Renewing the arts of painting, sculpture, metalworking, and architecture were another part of the Italian Renaissance.  Michelangelo profited from these efforts directly under the patronage of the Medici.

Lorenzo Il Magnifico de' Medici was one of the fathers of the Italian Renaissance, funding the finding of manuscripts, their copying and translation, and the study of the liberal arts.  So, necessarily, this book is also a minor history of the Medici. 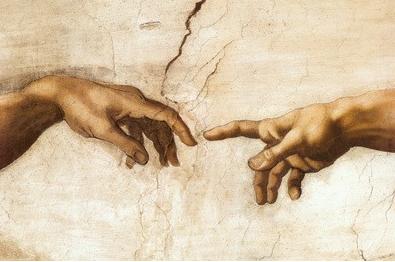 Part of the fun of reading about Michelangelo is that we have many contemporary accounts of the man, even his contracts for work!  And we have writings by Michelangelo himself, which include poetry and letters.  We get an immediate impression of him from his own words, and this impression is fleshed out by the words of his contemporaries.

The author makes good use of these resources.  (I provide links below to some free e-book editions of these works.)  Because Michelangelo was famous in his own lifetime, people kept anything relating to him for posterity and for profit.  So we have even seemingly minor details saved for history. 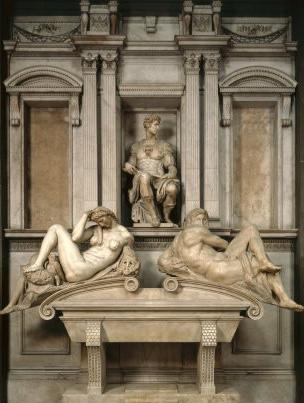 But foremost among the artist's accomplishments, according to the author, was Michelangelo's creation of himself.

...Michelangelo transformed both the practice of art and our conception of the artist's role in society.

Michelangelo's talent and long life earned him a status other artists could only dream of.  Popes, patrons and princes treated Michelangelo with respect.  They conceded, as Michelangelo demanded, to be given a free hand to create the art the patron had requested, without their interference.  Proud Michelangelo made it very clear that he was was an artist not an artisan. 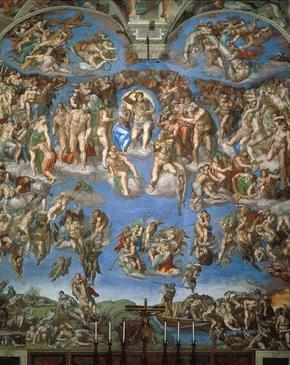 This is a book for real, die-hard Michelangelo fans who desire more detail about the creation of his most famous works of art.  Lots of detail.  It is for fans to savor and to live vicariously with the artistic genius.

Michelangelo the man is presented to us.  We learn of his failings, his vanity, his feckless family, his desires, his sins, his regrets, his passions, and his old-man's search for a legacy.  What was Michelangelo like, as a person?  Well, the man was well known to be:

All is presented with a lovely prose style that is easy to read.  We are allowed to follow the stories of how world-famous works of art were created, as if we were a fly on the wall.  But again, the level of detail is something that will stun and pleasure die-hard fans, but might repel the casual art lover. 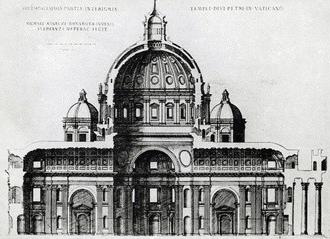 Section of St. Peter's Basilica in Vatican from Drawing by Michelangelo

The life of one of the most revolutionary artists in history, told through the story of six of his greatest masterpieces.

Among the immortals—Leonardo, Rembrandt, Picasso—Michelangelo stands alone as a master of painting, sculpture, and architecture.  He was not only the greatest artist in an age of giants, but a man who reinvented the practice of art itself.  Throughout his long career he clashed with patrons by insisting that he had no master but his own demanding muse and promoting the novel idea that it was the artist, rather than the lord who paid for it, who was creative force behind the work.

Miles Unger narrates the astonishing life of this driven and difficult man through six of his greatest masterpieces.  Each work expanded the expressive range of the medium, from the Pietà Michelangelo carved as a brash young man, to the apocalyptic Last Judgment, the work of an old man tested by personal trials.

Throughout the course of his career he explored the full range of human possibility. In the gargantuan David he depicts Man in the glory of his youth, while in the tombs he carved for the Medici he offers a sustained meditation on death and the afterlife. In the Sistine Chapel ceiling he tells the epic story of Creation, from the perfection of God’s initial procreative act to the corruption introduced by His imperfect children. In the final decades of his life, his hands too unsteady to wield the brush and chisel, he exercised his mind by raising the soaring vaults and dome of St. Peter’s in a final tribute to his God.

A work of deep artistic understanding, Miles Unger’s Michelangelo brings to life the irascible, egotistical, and undeniably brilliant man whose artistry continues to amaze and inspire us after 500 years. 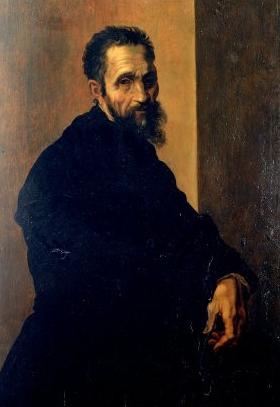 Portrait of Michelangelo, circa 1535

Michelangelo is published by Simon & Schuster.


Simon & Schuster is a major force in today’s consumer publishing industry, dedicated to bringing an extensive cross section of first class information and entertainment in all printed, digital and audio formats to a worldwide audience of readers.

Direct link to the book at S&S


Here are direct links to the book, and two other books of interest to Italophiles, at Amazon.com:


There are various e-book formats of a translation into English of sonnets written by Michelangelo, available via Project Gutenberg, the grand-daddy of internet free e-book sites.


Vasari includes his biography of Michelangelo in Book 9 of his series Lives of the Most Eminent Painters, Sculptors & Architects, from which the author Miles J. Unger quotes many times.  It is available for free from Project Gutenberg in various e-book formats.

Book 9
From Michelangelo to the Flemings, roughly 1474-1564
Includes Michelangelo (Michelagnolo) and Sansovino
Direct link to Book 9 e-books at PG


I have a concise history of the Medici dynasty on my website:  Candida Martinelli's Italophile Site.