The Lost Catacomb by Shifra Hochberg 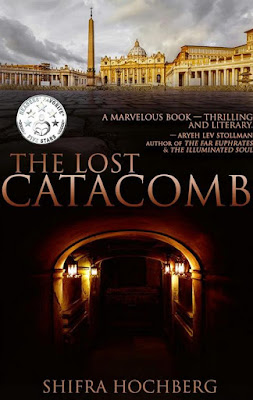 The author of The Lost Catacomb embraces her genre of historical-conspiracy thriller with gusto.  The modern melodramatic style of the genre requires much research to plant the story within plausible ground, much plotting to create the evil plan that the antagonist has in motion, and academic characters to move the plot forward while informing the reader of what is being uncovered and its significance.

It is not an easy genre to write, and some readers find it cumbersome to read.  I like to just dive in and enjoy the fun, while excusing away any awkwardness inherent to the genre.

The historical-conspiracy novel has enjoyed a boom since the success of Dan Brown's novels, foremost of which is The DaVinci Code, and their adaptations to films starring Tom Hanks.  If you'd like a comparison between this historical-conspiracy novel and those of Dan Brown, I'd point out that The Lost Catacomb's protagonist is a woman, and the book is written by a woman.

The strong female protagonist, Nicola, is an academic who can think for and take care of herself.  Her male sidekick, Bruno, is handsome, helpful, and eventually a love interest.  The role reversal may be most enjoyable for female readers. 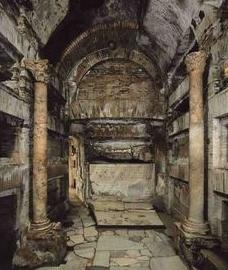 As expected, the protagonist learns much about herself in the course of unwinding the evil plans of the antagonist.  One thing she learns is how strong she really is:

I never thought I'd have the strength, the courage, to do what I've done tonight.

The young professor has to face down pure evil, and come through it in one piece.  She comes away from it all slightly hardened, and full of purpose, and anger.

...anger at a world in which people conspired to kill others imply because they worshipped differently or had different ethnic origins. 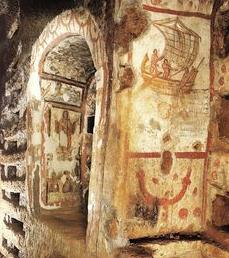 That brings me to another Dan Brown comparison, or more accurately a contrast.  The protagonist uncovers not just a vast historical conspiracy, she also learns about herself, her family's history, and much more about her Italian roots.  She is a hyphenated Italian whose Italian grandmother never shared much of her culture with her American family.  So, being in Rome, Italy, working with Italians, falling in love with an Italian, awakens Nicola's interest in her roots.

I could make two other comparisons to Dan Brown's novels.  The author presents the necessary convoluted plot very well, just like Dan Brown.  She also has the sometimes unnatural sounding dialog as in the Dan Brown books.  That's a result, in both authors' books, of the genre requiring much explanation, exposition in book terms.  The most interesting way of presenting that information is through dialog, but all that information coming from people, even if they are university professors, can make for some awkward reading at times.  It is a hazard of the genre. 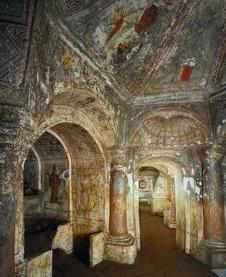 There are five parts to The Lost Catacomb, as the era of events changes.  Each part is entertaining in its own right, as if it were a short story. 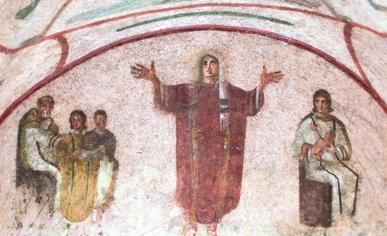 Most of The Lost Catacomb is set Rome, Italy, and the Vatican.  It has Neo-Nazis, an international conspiracy of evil, some ancient Roman scenes, and some scenes set in WWII Rome that portray what some of Rome's Jewish citizens suffered then.  Rome's Jewish community is the oldest continually existent Jewish community in the world, dating to many centuries B.C.  The survival of that community during the war was no small event.

I hope by now that readers of historical-conspiracy novels know that the history cited in the books is not fact, but fiction, created for the convenience of the plot.  In The Lost Catacomb that is the case with more than one date and fact.  If you are curious about the history mentioned in the book, and the historical figures mentioned, I suggest a trip to Wikipedia.com, where you can read up on the events and people.  That is just part of the fun of historical thrillers and novels, in my humble opinion, the sparking of interest in learning new things.

The book is well-edited and very attractively presented.  There is one short titillating sex scene, one short explicit sex scene, and a strong vulgarity here or there.  The narrative style is third-person limited, putting us in Nicola's mind whenever she is in the scene.  When she isn't in the scene, we are put into the mind of one of the other characters.

I enjoyed most of all the parts of the book set underground in Rome, in the catacombs, since they put the reader into another realm completely.  The reader can feel like a tomb raider at times, and memories of Indiana Jones III may come to mind.  The author has her academics use the correct terms underground, bringing great realism to their discussions.

This is one for fans of historical-conspiracy thrillers, and for readers who like female protagonists.  A suspension of disbelief is necessary, of course, and to take the history presented as not written in stone. 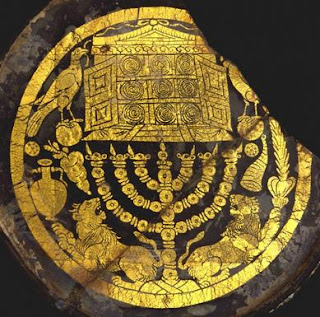 An intoxicating blend of Vatican thriller and heart-rending love story, THE LOST CATACOMB is a stunning debut novel set against the backdrop of the Holocaust in Italy.

At its heart is Nicola Page, a beautiful young art historian who flies to Rome to assess a newly discovered catacomb of enigmatic provenance. Its magnificent frescoes hold the clues to a centuries-old murder and the existence of a fabled treasure from the ancient Temple in Jerusalem.

Assisted by a handsome Italian archaeologist, Nicola is quickly drawn into a tangled web of intrigue and peril, masterminded by a powerful priest who is determined to destroy those who would reveal the dark secrets of the past.

And as Nicola uncovers layer after layer of this deadly past, she is brought face to face with shocking facts about her own family history—facts that will forever change the course of her life.

Here is a direct link to the book at Amazon.com :